THE FORM OF BECOMING

For Gilbert Simondon, a technical object as well as a biological organism is characterized by being located in a process of becoming. In his own words: “The machine is a result of organization and information; it resembles life and cooperates with life in its opposition to disorder and to the levelling out of all things […] it slows down, […] and becomes a stabilizer of the world”.

Coinciding with Simondon’s idea of technical object, The Form of Becoming is a sculpture which renders the emergent behavioral process through which intelligence is embodied and manifested, a negentropic machine capable of evolving and transmuting its form, moving towards order, balance, symmetry and silence while revealing patterns of information and organization embedded by default within nature. The Form of Becoming investigates intelligence, in both artificial and natural systems, it nurtures the idea that complexity and creativity can emerge from the mindless, meaningless, automatic process which is natural selection and evolution. 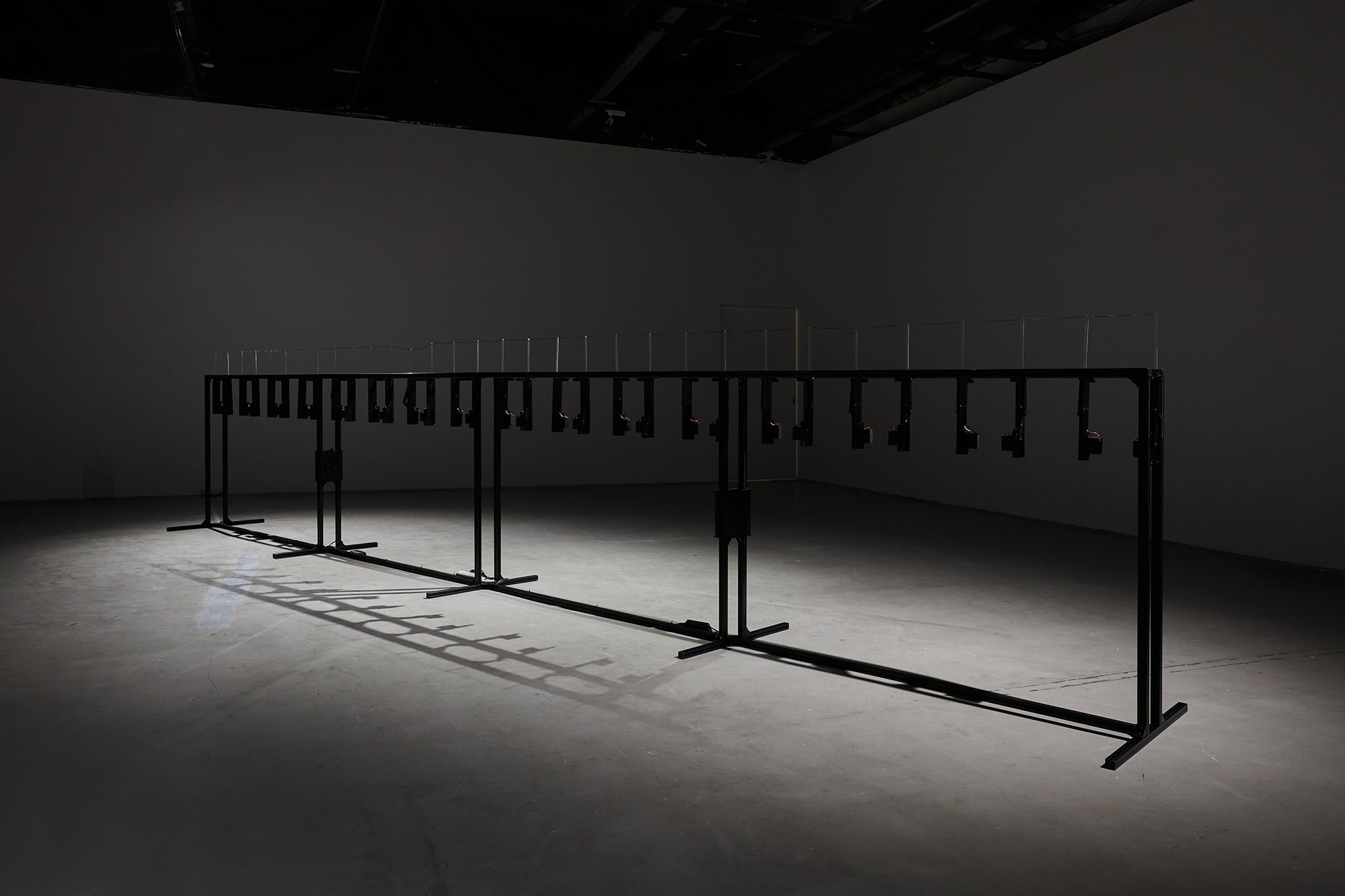 One of Darwin’s nineteenth-century critic, Robert Beverly MacKenzie, refers to the biologist’s work as a strange inversion of reasoning where absolute ignorance is fully qualified to take the place of absolute wisdom. Furthermore, MacKenzie refers to evolution and natural selection as a “beautiful machine” when he states: “In order to make a perfect and beautiful machine, it is not requisite to know how to make it”. According to Daniel Dennet, philosopher and cognitive scientist, around a century later after MacKenzie’s critic, Alan Turing said in juxtaposition to Darwin’s ideas:  “In order to be a perfect and beautiful computing machine, it is not requisite to know what arithmetic is”. Two apparently distinct statements, one referring to nature and the other to computers, however, both use the word “machine” to invoke some sort of ideal entity which in itself is the product of ignorant self-organizing parts of one same whole. In this context, natural and computational objects, are in essence machinic and systematic self-organizing structures. 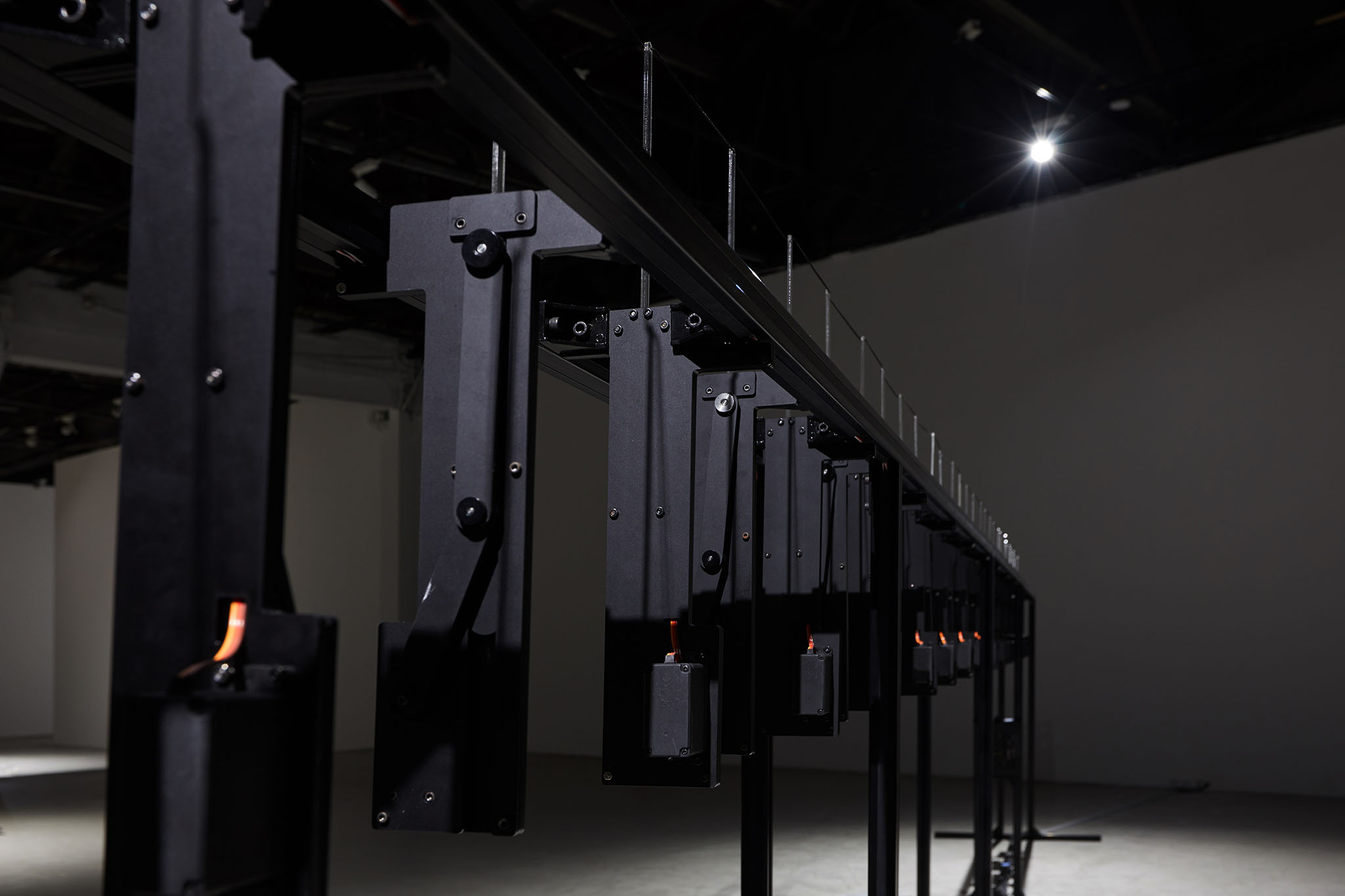 The Form of Becoming blurs the seeming border which separates the natural from the artificial, it uses AI in order to enable abstract synthetic forms with behaviors believed to be exclusively natural. While learning to be a perfect and straight line, the motors in the sculpture chirp and crick in almost insect-like ways while the black thread displaces in space in organic manners not too distant to how certain biological organisms move. The sculpture is comprised of a system of intelligent agents in a simple environment with a defined number of possible states to be in and a choice of actions to be exerted. By using reinforcement learning techniques of artificial intelligence, each agent is rendered with no previous model of itself and let free to explore its own milieu. Through a system of punishment vs reward each agent learns from the actions it takes and the states it achieves. With a very simple objective, to go from point A to point B, as an individual entity, each agent explores its mode of existence, learning to move within a single linear dimension, in contrast, as a collective of intelligent agents, the system evolves from chaos towards order, from abstraction to representation, through the process of becoming a recognizable and defined ideal form, a straight line. The Form of Becoming investigates intrinsic relations between intelligence, in both natural and artificial systems, and formalism in art.

3D renders of the sculpture showing the two main stages of the system; while learning and after learning

In this abstract system, each intelligent agent is embodied as a motor, the states in its environment is represented as an angular range of rotation and the actions as one of two directions in which each agent can move a linear actuator. Each linear system holds a segment of a long black string, this translates as a point in the represented line. Once the system runs, each agent learns, from informational equivalents of pain and pleasure, to move towards the highest values within its environment, this means ultimately to displace its position from point A to B. In order for an agent to learn, it needs time, generations of exploration, each agent will get punished for bad decisions and rewarded for appropriate ones. Every time a learning generation is finished, a light will blink for that particular agent, indicating the end of a cycle and the achievement of new knowledge; the agent becomes more intelligent. Once all agents learned to be and stay in point B, the system, as a collective, has successfully mutated into a stable, balanced, symmetric and silent form; a straight line. Finally, after a few seconds, the sculpture forgets, all agents are rebooted and the cycle of creation, chaos and order restarts, this time with a totally different and unique behavior.