Find below the test video of my prototype – three of the four processes are combined (freezing, collecting, pushing). In the next step the last process (a collector for the molten water) will be added. In the video you see a time-lapse of 6h, the ice grows about 10cm.

Custom-made and 3d printed parts. The whole printing process took about 35h and was spitted in five different parts, which where later glued together. The part will be assembled inside of an aluminium tube and holds the freezing-unit (see the last post). 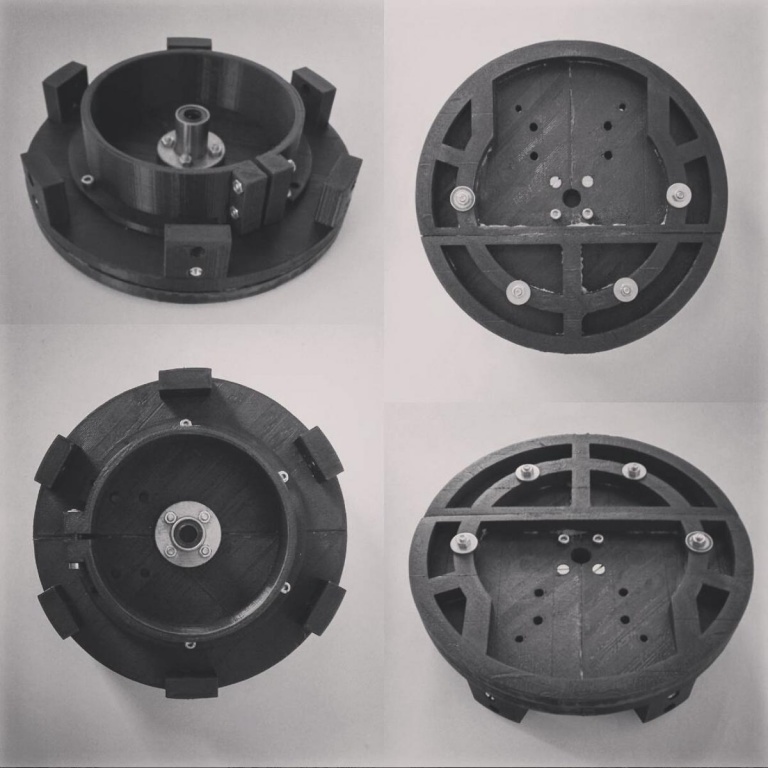 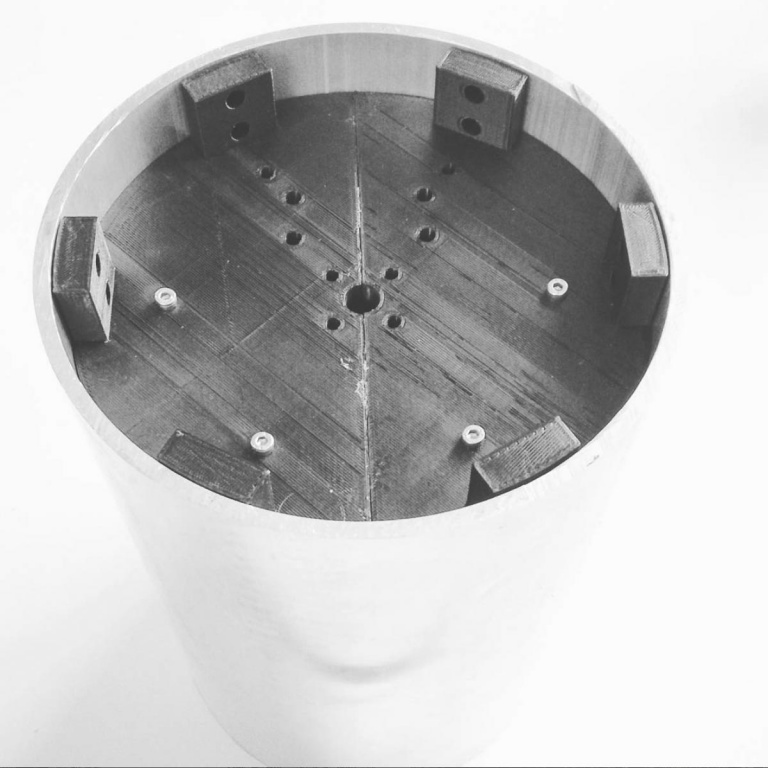 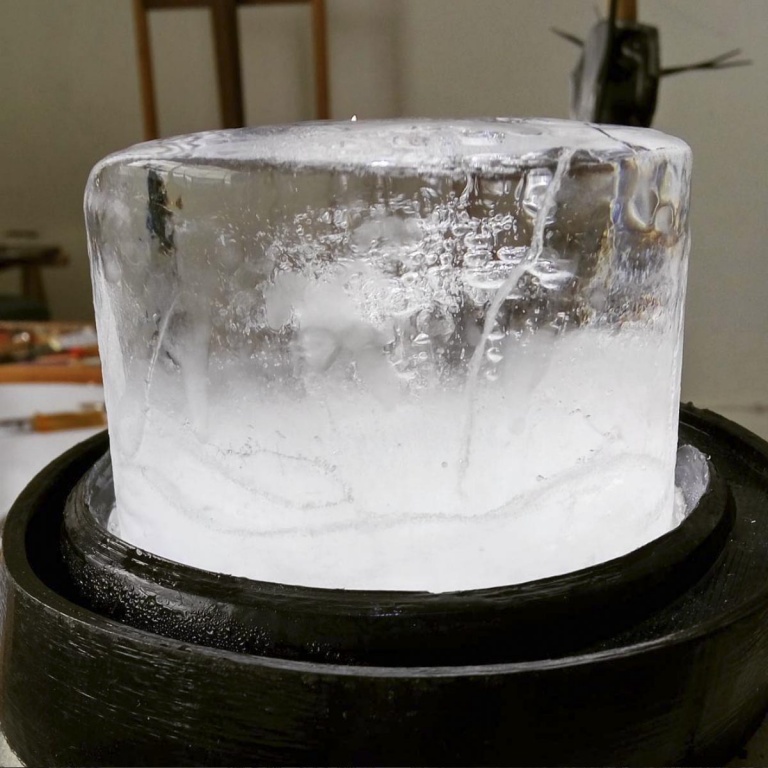 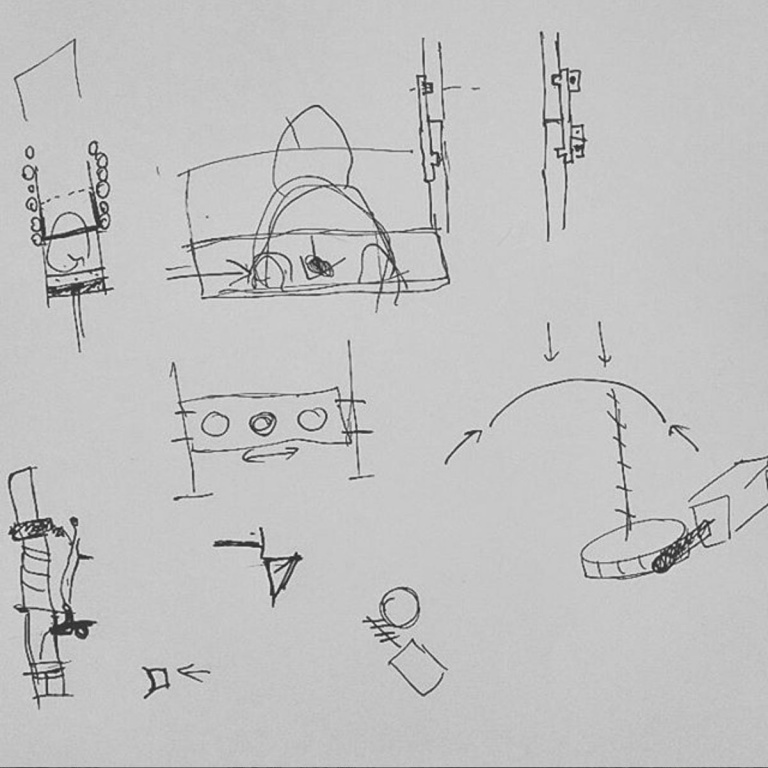 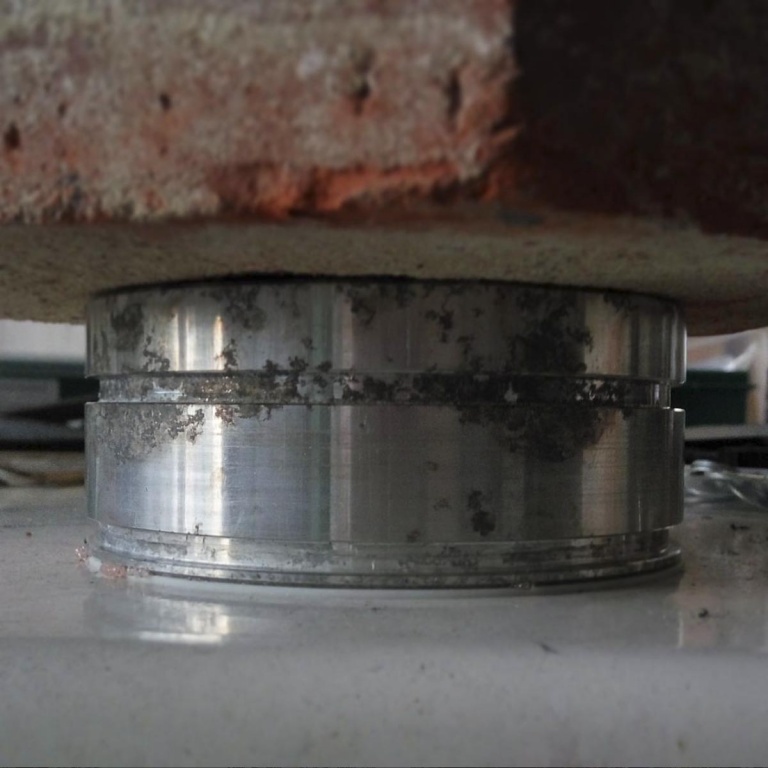 1 — Ice-Core
2 — drawing for the collector unit
3 — a teflon layer was glued onto the piston, so that the ice won’t stick to it after freezing

The Image below shows a simulation of one of the four processes of the machine the Freezing Unit. The model was used as a construction plan. A copper pipe is bend around a tube to create a spiral, which is isolated from outside and connected via flexible tubes to a modified freezer. That allows a cooled liquid (-10° C) to be pumped to the spiral to freeze the ice core inside of the tube. You can find below each step of building process of the different parts for the prototype. 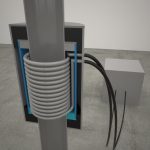 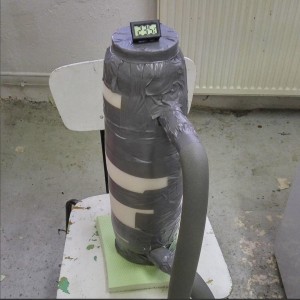 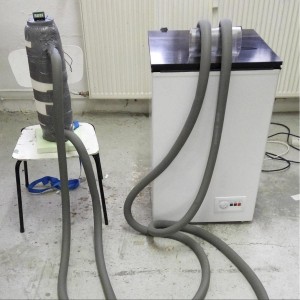 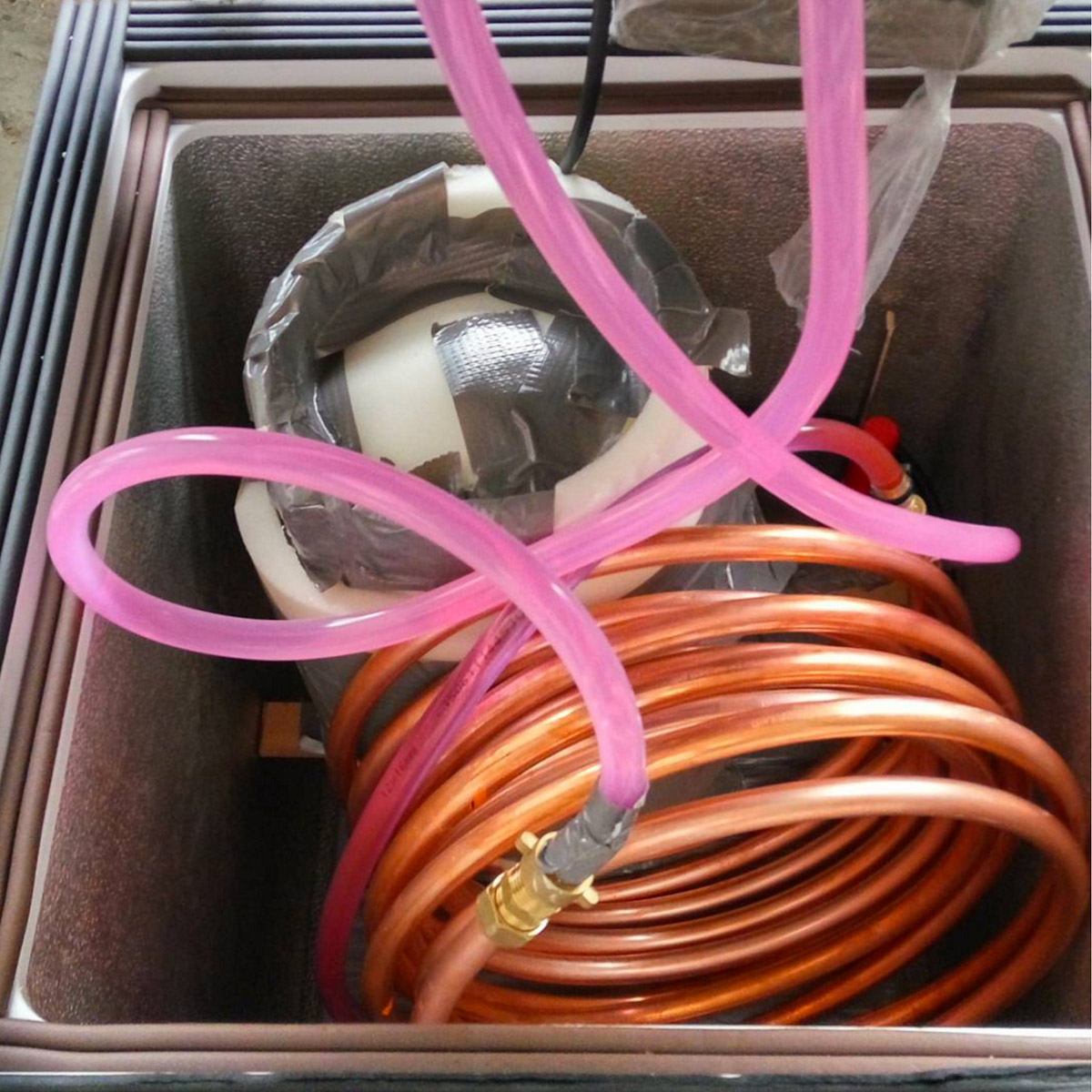 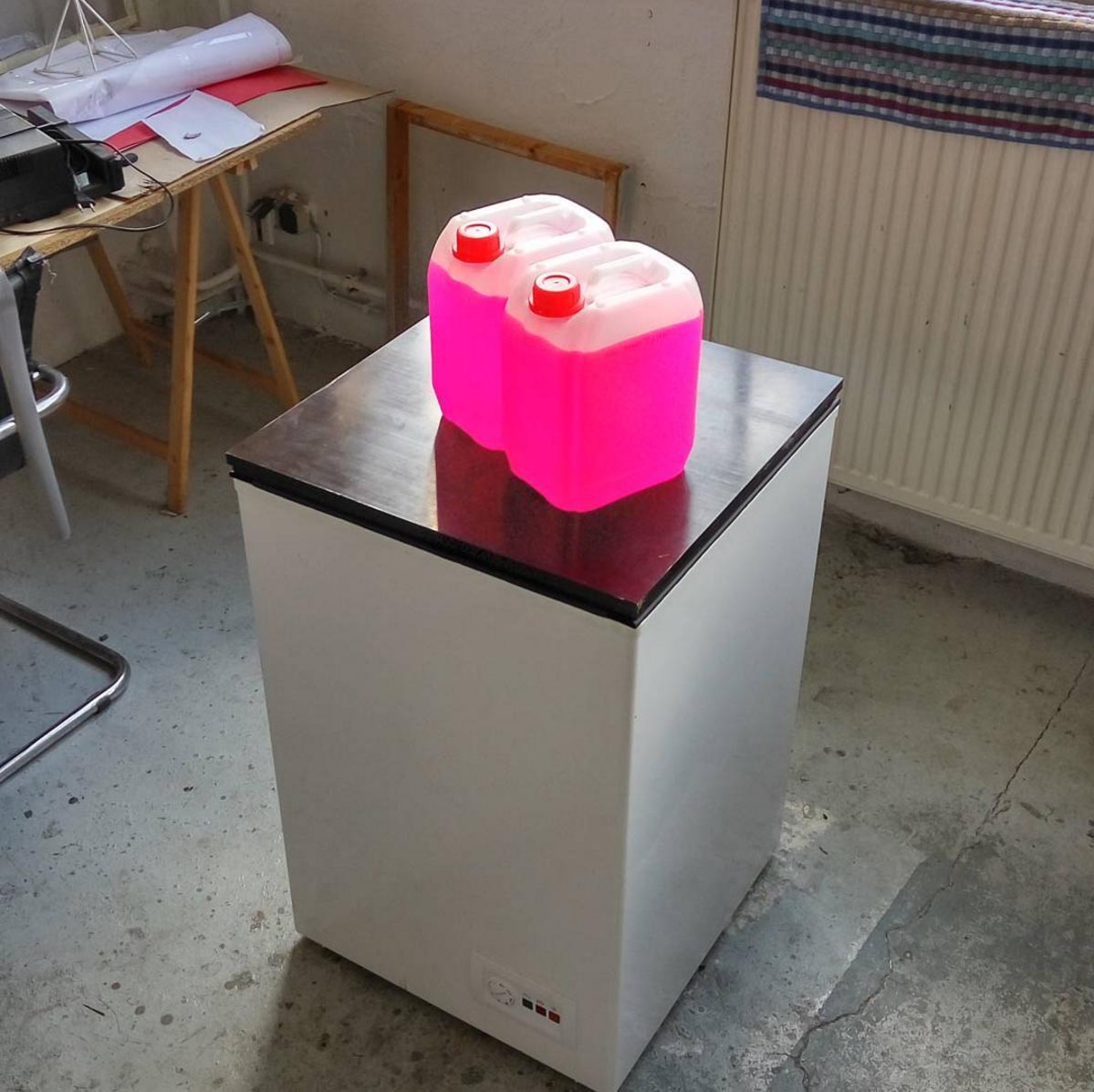 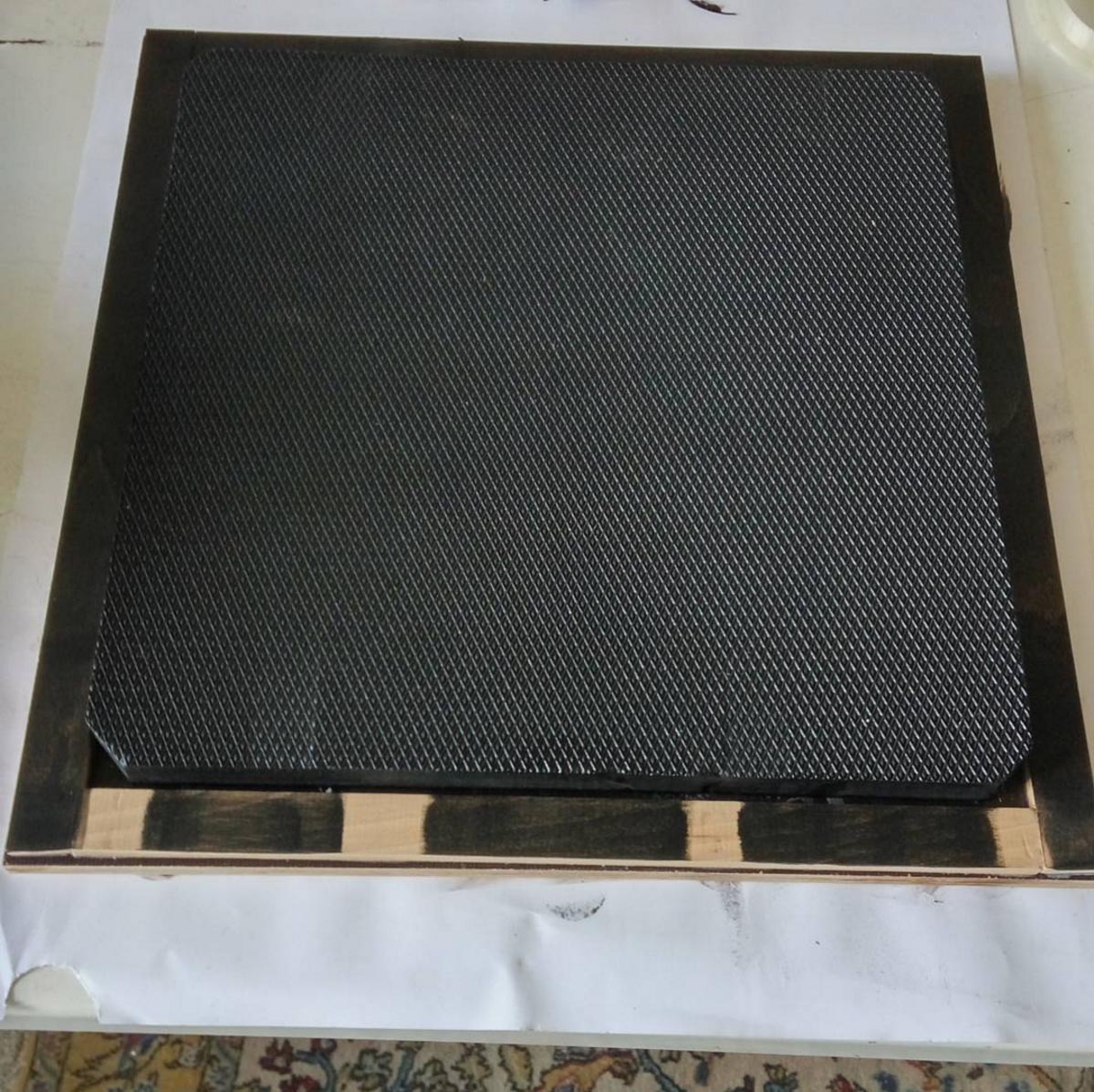 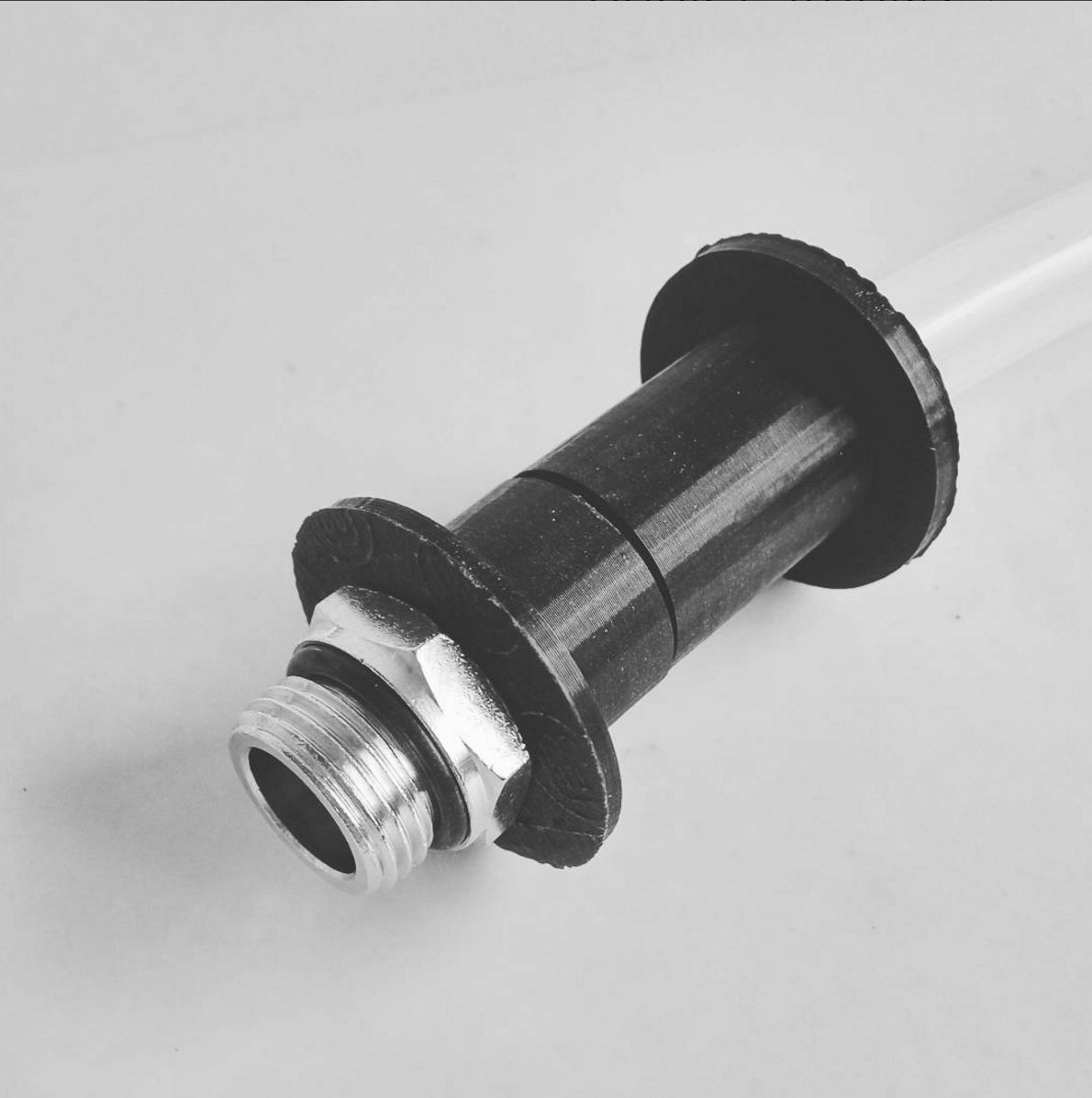 In this short text I want to introduce my approach of a possible artistic representation for the perception of history.
Starting from the question of how to perceive history, the task of my proposed work is to explore an observable understanding of history, through the telescope of technology.
This new non-human sphere is called techno-sphere in the realm of the anthropocene and inhabits technological objects like living organisms. They are part of our reality and in this sense shape our human environment to a new geological extent. But this also means, that these technological objects carry within themselves, like any other organism, a history of their development. A technological DNA so to say. The Czech Philosopher Radovan Richta called this development “Technological Evolution”.

My work uses his ideas to focus on technological objects that we use today as the products of different lines of development, culminated in “fittest designs” – to use a term from evolutionary theory. These lines can be traced and followed back in time in a media-archaeological sense. Which opens up a whole network of interlocking entities that is driven by chaotic feedback loops from art, science and society, what – over time – shaped our understanding, as well as our interaction with these technological objects. A visualization of this network can be imagined as a flock of birds before sunset. Each single bird represents an entity that reshapes the whole, pushing and pulling in new directions. The resulting image reflects Gilles Deleuze’s idea of a map of relations between forces without a centralized power, what he calls a “body without organs”. These forces shaped every technological object over time – its history, that is deeply inscribed into its Techno-DNA.

But how do these structures evolve?
These systems are dominated by nonlinearity, uncertainty and chaos, chaos that is in a funny, way as Ilya Prigogine and Isabelle Stengers put it, open for the emergence of “Order out of Chaos” – like structures as the calm and beautiful eye of a Hurricane that is surrounded by its destructive winds.

As I used the term “emergence”, I want to quickly introduce the idea of complex systems and how I use it. Complexity in this context does not just mean that a system is complicated. Rather, complexity refers to an understanding of systems as constant interacting and dynamically changing entities. Small changes in the initial situation can in the further run resonate with other factors and lead to new and unexpected outcomes, that also defy attempts to model them.
Thus the system is driven by positive and negative feedback-loops that allow emergent structures to evolve. Emergence in this context means the development of new properties of the whole system that are not present in its single parts.

For my work I want to adopt some of these scientific principles and apply them to a dynamical driven history of technology.
Theoretically I will follow the materialist ideas of the French postmodern philosopher Gilles Deleuze and the interpretation of his ideas by Manuel De Landa. Who greatly applies them to Biology, Social Science, Language, War Machines and Simulations.
So, one core principle is nonlinearity forced by differences. But I mean differences in another sense than, for example expressed by Apple as reaction to Ibm’s “Think” advertising campaign. There “think different” means to think in an unlike way. What I mean is the difference that drove Apple to this claim: a difference in the intensity of their market share, an economic property that they wanted to achieve, by attacking the alpha male of desktop computers.

As described in this system higher values are being attracted by lower values, which are called intensive properties. They are defined by their impossibilty of being devided in contrast to metric values, which are called extensive properties. So, for example, cutting a 20 degree hot apple in two parts will result in two halfs in size but not in two parts with half of the temperature.

Intensive properties also account for phase transitions, that means if the temperature is reaching a critical point the system enters a new state – like when ice is going from liquid to solid or from solid to gasoline, but it can also be applied to economy in phases of steady growth, boom or recession.

For me the crucial fact of intensive properties is, that they can drive a system. And these systems can be visualized on a map – a map of relations between forces so to say or “abstract machines”, as Deleuze also calls them.
We know this best from the weather forecast. Big amounts of air are being moved creating areas with high and low pressure.

I want to use the idea of these maps to visualize densities and vastnesses of technology in global reference. Vectors like communication, food production or energy consumption as well as social and political urges will change in intensity over time, forming a collection of vectors that forces technologies to adopt to this changes.

This approach is understood as Assemblage theory, which is describing wholes characterized by relations of exteriority on multiple layers and on a global scale.(De Landa 2006:10)

However why are these interconnectivities or relations so interesting? As I want to argue – even that they are not the focus of my research – they can give us answers to some contemporary geopolitical questions like: why clean digital technologies of the West are somehow connected to, and in this sense, materialized by the dust in the lungs of Chinese workers and why a beach in Africa is suddenly being materialized as skyscraper in India, an interdependent global megastructure that Benjamin Bratton calls the Stack on a computational level.
So in my research, I will explore these maps of flows of relations that drive a system to local optima or hotspots in globally distributed locations.

In addition to this, if critical points of Intensities are reached – paradigm shifts will drastically change the constellation of the map by what old forms of Technology will be replaced by totally different new forms. De Landa describes these phase transitions really graphic through the intensification in the material flow of food-production or military tactics. I will apply them to new paradigms in technology.

So in a bottom-up macroscopic view to follow the line of specific phase transitions through the history of technologies could reveal some critical points or attractors. Which are, for instance; the introduction of dynamic thinking, including the vector of time, through the Steam Engine and the understanding of its principles through thermodynamics or new network capacities introduced through the computer, especially through software, which right now accelerates our social, environmental and financial system to a critical level.

Back to my work and to a concrete example to explore a technological evolution.

For my work I choose one of the “fittest designs” of today – the smartphone. It combines high-tech developments: from the camera, battery, display or sensors, to the processor, memory or communications units, as well as newly developed materials for the case and the display glass. So by tracing back each part as a fragment in evolution, we can explore the implication for today’s interactions with the resulting meta-technological objects, out of historically learned processes; to see biosphere and technosphere as co-evolutional system.

For the resulting artwork, a technological artifact will be decomposed into its single parts. In a second step, these parts will be reduced to their materiality to set a special focus on geopolitical important materials that were driving – or to use Jussi Parikka’s term from his book Geology of Media – “catalyzing” our social, economic and media thinking. In his own words: geology of media means “to track materialities and times of media culture through non-organic components, entangled in issues of labour, economy, representation, and discourse.”

That means that not only the process of interaction of the bio- and technosphere shaped these technological artifacts, but also their materiality in a geopolitical sense was a strong force in the direction of development.
This reduction to a material level opens up the form of representation for the artwork. It will borrow a process from geology called stratification, to represent the different historical material-levels of the evolution of a technological object; and in this sense it also borrows the geological time scale.

In the field of geology, Earth can be seen as an archive. Layers in rocks, sediments or ice are holding the geological history of the planet. Changes over time are inscribed in different layers – so going deeper means going further back in time.
Thus for my work, I want to utilize the stratification of ice in the form of an ice core sample that is mostly used in the research of earth’s climate.
Through stratification, scientists can read in the layers of matter like in a book. This materiality aspect of history through layering is what I want to apply to a history of technology.

Another important aspect for the sculpture is the dynamic in itself.
The work adopts the geological idea by simulating an ice core, which represents a media-artifact history with its multiple layers. The core, through its cyclic nature, will be permanently moving upwards and thus seems like growing.
By constantly getting taller, the core will be exposed to entropic processes, like the heat from the surrounding area, which over time will melt the core and unfold its precious freight. The released elements, together with the molten water, will then be captured, iced and inserted back into the system as the undermost element of the Ice Core, pushing up the whole framework again.
As a consequence, a dynamical loop evolves where the sculpture is in a constant change of growing and shrinking. In doing so, this repetitive process is utilizing the “morphogenetic potential” of water in terms of the aggregate states of frozen, fluid and gas. In this process, the temperature acts as a catalytic converter, promoting the different phase states, sorting and shaping the minerals into constantly changing layers. 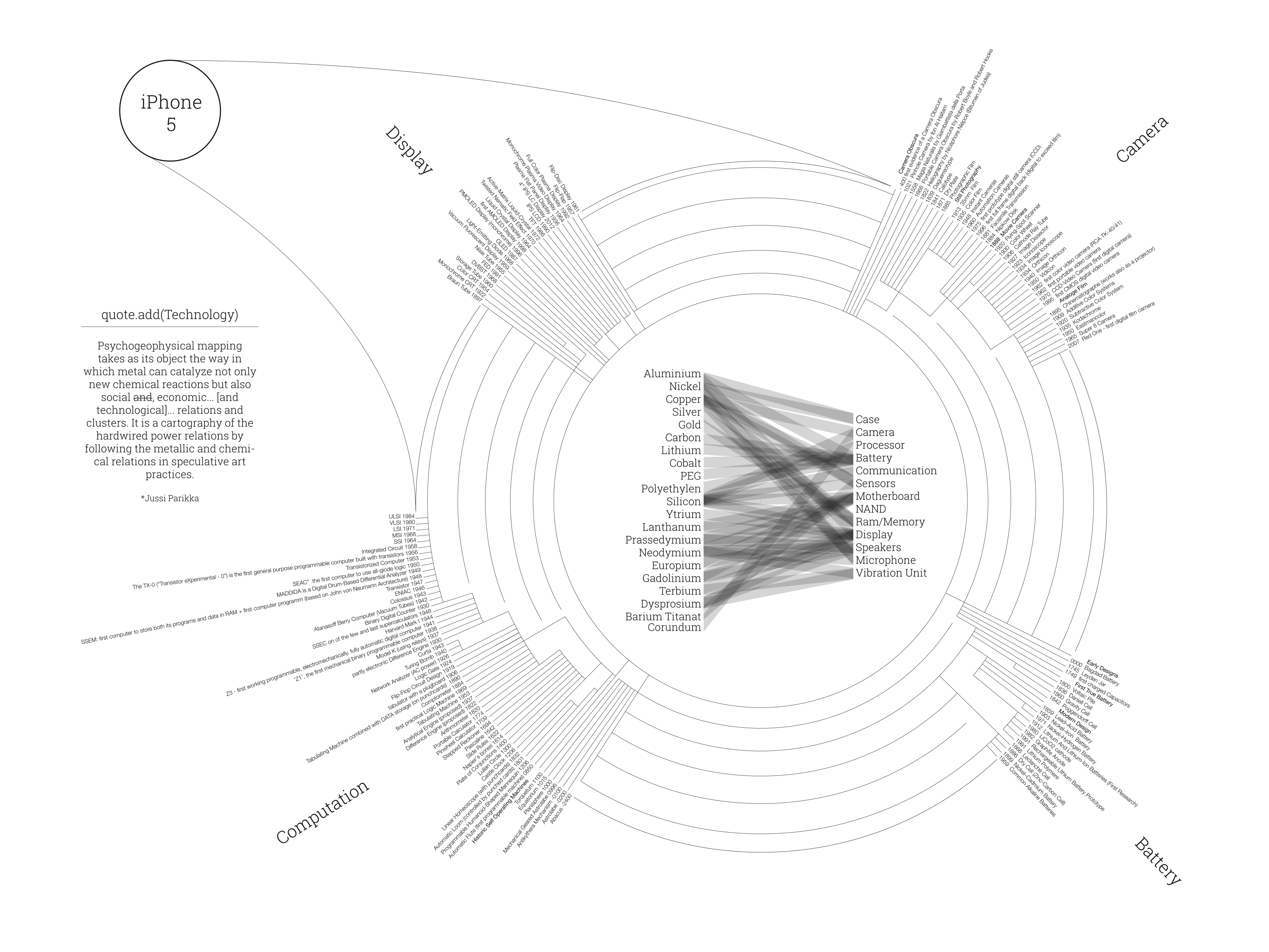